Skip to content
Investing
March 11, 2020 Cryptomorrow 0 Comments
Reduce physical contact. Reduce travel. Don't attend large gatherings. If you feel sick, stay at home. Wash your hands.
These are some of the top advice from experts to reduce the spread of coronavirus. In some places where the affects are particularly rough, a full neighborhood or city might go on total lockdown. The economic impacts of such activities at this point are far from known, as is the severity of the virus itself and how far it might spread. Uncertainty abounds.
The old tools of Quantitative Easing simply isn't enough to battle the current crisis. Those are tools for the rich, whereas the virus is affecting everyone. Therefore, what's needed here is something different. Something that will allow poor people who are sick to stay at home. We discussed Hong Kong and helicopter money in an article two weeks ago. More recently, we've seen a great example of this from Italy...

This is a huge step int the right direction. Almost makes the last 10 years of stimulus look like an unnecessary free handout.
We're expecting a huge press conference from the United States later today. However, in a preemptive statement, Treasury Secretary Mnuchin has said not to expect broad stimulative measures.

Not to make light of the situation, but one thing that's happening as a result of the fast spreading coronavirus is the level of cooperation around the world seems to be increasing. Globalization is toast and many supply chains may see irreparable damage but from a policy point, we might just see something emerge that economists have been calling for over the last decade but have yet to really see, until today.

See, the problem with quantitative easing is that it's only a temporary solution from the central bank but what's really needed to make it effective is fiscal stimulus from the government itself. In most cases, politicians are unwilling or unable to take these measures because it means taking on large amounts of debt.

Today in the UK, something unique was seen. The conjunction of monetary and fiscal policy acting in unison to cushion the side-affects of the virus.

For the first time, we've seen simultaneous action from a central bank and their government counterpart. The Bank of England announced an emergency rate cut of 0.5%, going from.75% to just 0.25%. A few hours later, the Chancellor of the Exchequer announced a special stimulus package to the tune of £30 billion.
It's a shame that it took a global pandemic to bring us to this situation, and that by the time we got here the affects will no doubt be dampened by years of unchecked central bank only stimulus, but as far as economic leadership is concerned Great Britain is certainly a stop ahead.
Tomorrow, it will be the ECB's turn to make their move. Hopes are high in anticipation but Lagarde will really need to pull a rabbit out of a hat in order to please the markets. First off, the Eurozone already has negative interest rates making it a lot more difficult to perform an emergency cut. Second, unlike the UK, the political structure of the EU is quite fractured, making it extremely difficult if not impossible to coordinate such action.

For anyone asking about bitcoin and the emerging market of digital assets, this just might not be the time to think about it. We can pretty much close the entire case by saying that bitcoin is being swept up by everything that's happening with traditional markets and being placed in the same speculative basket as the stock markets.
So, we should be looking at the stocks right now to figure out how to trade cryptocurrency. At least until we see a significant decoupling between the two. This might come later on, once we understand more about the economic impact and how long it might take to see some sort of recovery. Or, it could come for other reasons that are yet unknown. There's too much uncertainty right now to make any type of forward-looking statements.
At this point, I myself am having trouble keeping on top of all the information. Between analyzing the markets, trading the markets, building a business, and raising a family, I've been having a lot of fun lately.
Speaking of which, I want to wish a very warm welcome to Pedro Febrero, who joins Quantum Economics as our first Analyst. Please feel free to reach out to Pedro directly on his Twitter or LinkedIn.
Speaking of the markets though, I think the most relevant thing that we need to look for is fresh lows. The S&P 500, for example, has found itself a very logical line of support at exactly 2,700 points. Should this level break, it's uncertain just how much further south things might go. 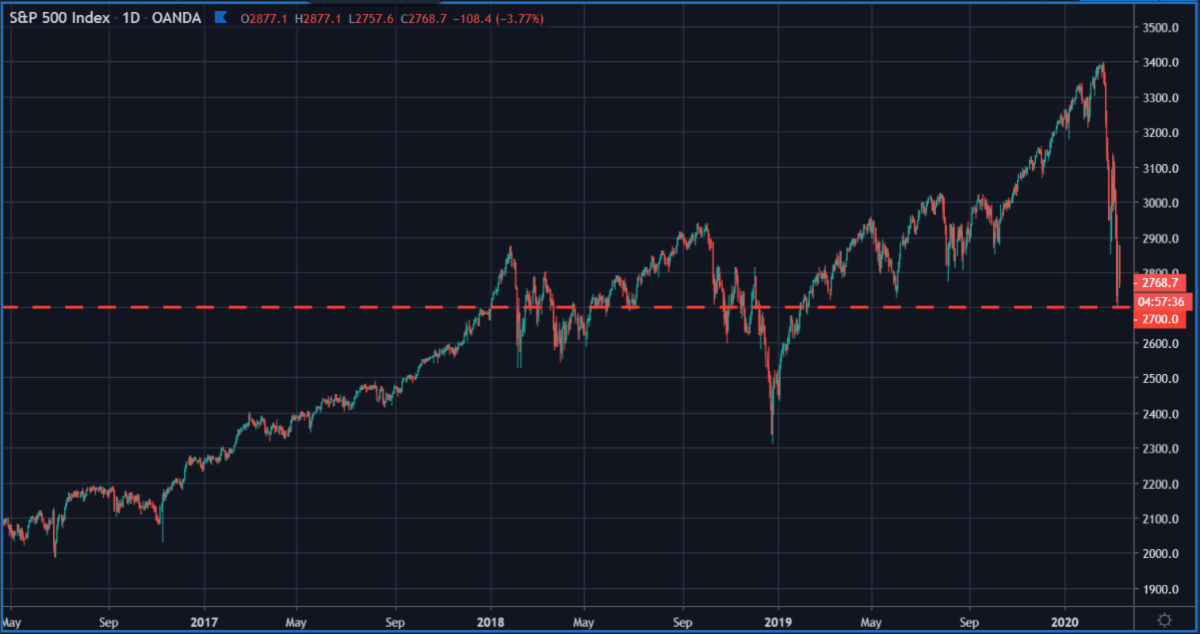 For anyone trading these markets, I highly recommend to use the short term charts and consider implementing trailing stops and of course proper money management.
If you found this letter interesting and/or useful, please send over your feedback as many of you already are. If you're just seeing it for the first time make sure to subscribe so you never miss an episode and always feel free to share on social media and in your chat groups. Have an awesome day!
Best regards,
Mati Greenspan
Analysis, Advisory, Money Management
Post Views: 352