Skip to content
Altcoins Bitcoin
February 12, 2020February 18, 2020 Cryptomorrow 0 Comments
Market Commentary by Mati Greenspan Founder Quantum Economics | February 12, 2020
So what will win in the end, tech giants like Google, big banks like JP Morgan, or new decentralized networks?
How about all three!! That's what seems likely to me anyway.
In the last 24 hours we saw two bits of news that could be giving us an excellent indication of how the future of decentralized technologies will play out.
The first is from Google, who has revealed that they are playing an active role in the development of Hedera Hashgraph. The second is an unconfirmed, yet well cited, report that JP Morgan is in talks with the Ethereum-focused, Consensys, regarding a possible merger of sorts.
Our little industry has certainly come a long way since 2017 when blockchain and bitcoin were almost considered dirty words by many. Today, it's seen by world leaders as, not only fully legitimate, but as an area with tremendous potential for growth.
Onwards & upwards. #ToTheMoon

Corona is Good for Stocks

All sense of caution has apparently been thrown to the wind as global investors take the stocks and bond markets higher than ever.
The official death toll of the Coronavirus in China has now reached 1,116 with 44,700 confirmed cases on the mainland and 519 offshore. It does seem like many factories are back online already but unfortunately it's really difficult to get good information here. I have a feeling that the true picture and affect on business won't really be available until mid-April when we start getting earnings reports from companies that do business with China.
Despite the obvious fact that travel and production are being heavily impacted many analysts are pointing out that the affects are only short term. Since stocks are anyways trading at valuations that are several years into the future, by then this whole thing could be well behind us.
However, central bankers do seem quite concerned. Not necessarily with the current situation but how it might develop. As several of them have confirmed yesterday, they stand ready to act if needed. Which analysts interpret to mean that if stocks actually fall, they will be there to catch them.
Here we can see the US stock market's short term Corona-dip and total recovery back to all time highs. All within a period of two weeks. 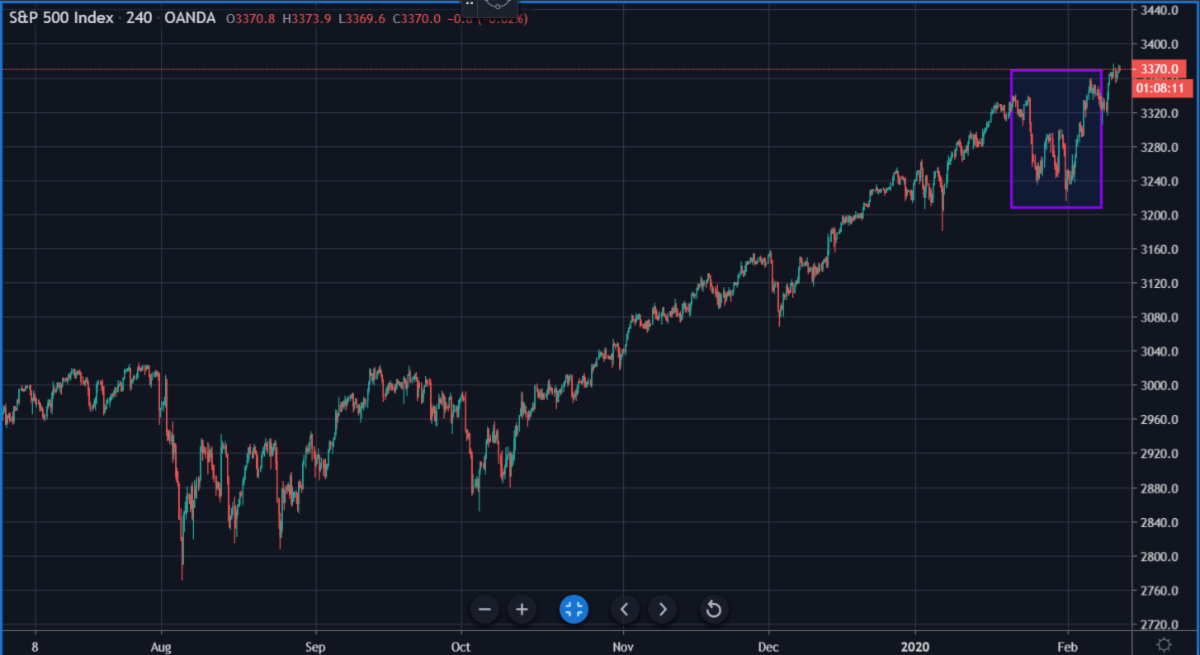 With a crack, the cryptocurrency markets continued on their path higher yesterday afternoon and clearly demonstrated just how much momentum there is in the nascent industry.
One of the major movers lately is Tezos, which has gained a total of 24% in the last 24 hours. I'm proud to report that we've been overhanded on this particular coins since the beginning of the year. 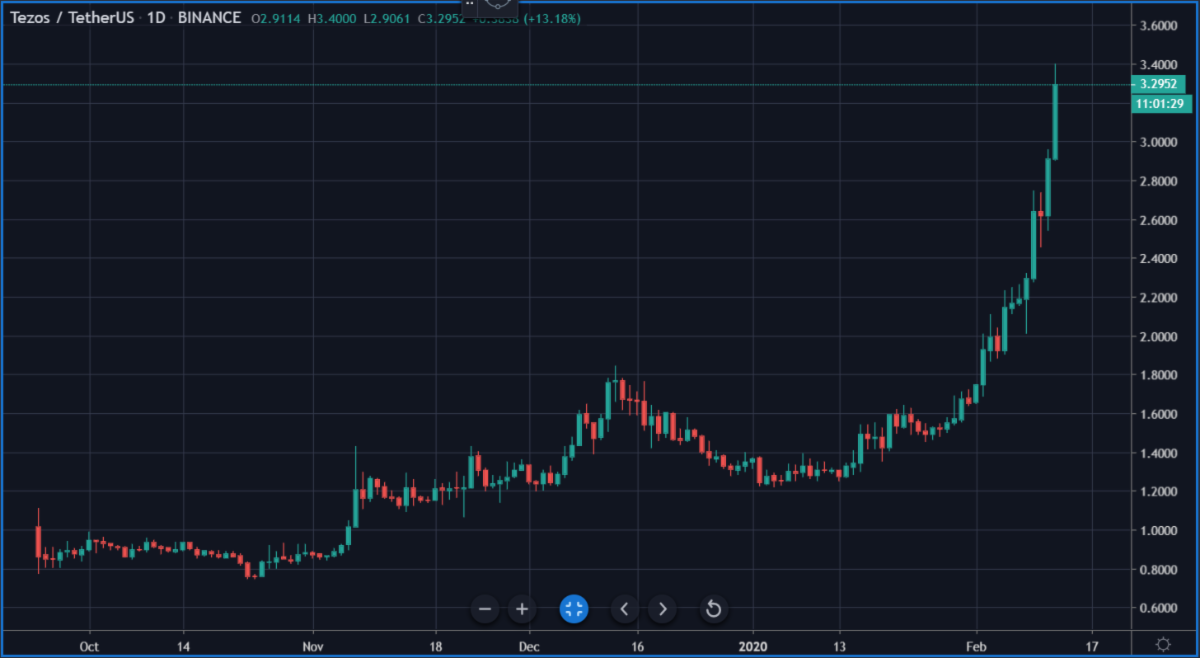 From where I sit there are two main reasons that XTZ is outperforming. The first is that the protocol seems to be a lot more stable and scalable than some of her older competitors. Though I'm not a coder and far from in a position to judge these things, there are several projects that I have my eye on that are building on it at the moment.
The second perhaps is a bit more significant from a tokenomics standpoint, and that's the staking mechanism. Many exchanges have already set up staking services where people hodling on exchange can take advantage and earn a bit extra. Of course the exchange takes a small cut but that's not important. What's important is that the Tezos system allows for a grace period when staking so that the operator can get started and then needs to continue to buy more as they go.
The fun part is when more people start to come in due to the appreciating price and the additional stake reward, basically creating a snowball affect and causing even further momentum on the price. A word of caution however, there is no lockup period on Tezos stakes. Meaning that even staked coins are technically liquid and can be pulled at a moments notice. There's no telling just how high this might go but I have a feeling that when we do finally see a reversal it does have the potential to get pretty ugly.
Have an amazing day ahead!!
Best regards,
Post Views: 271