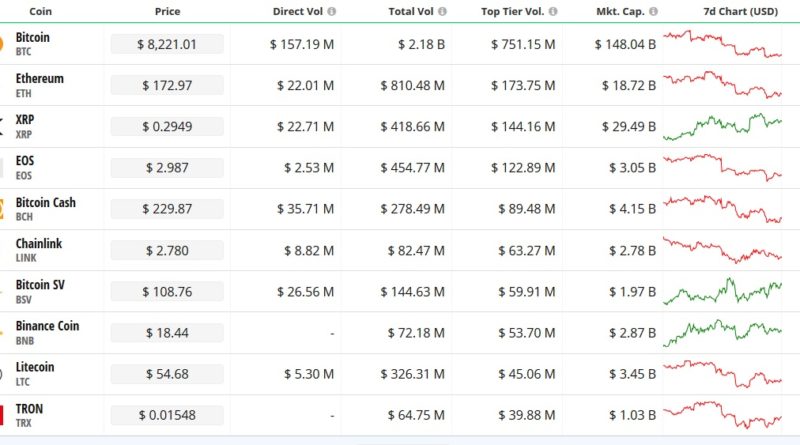 The prolonged low volume consolidation period has claimed her first victim and it's a big one.

To be fair, Poloniex has been steadily losing market share for more than a year and being bought out by Goldman Sachs backed Circle in February 2018 (light blue bar) only seems to have made things worse.

Now it seems that Circle is ditching Poloniex, or rather they've been trying to offload it for a while and now it's finally been spun off in a deal that allegedly involves Justin Sun, though Sun denies it.

The cryptocurrency market is changing quickly and the dream of a clear path to regulation vis a vis Goldman-Poloniex partnership has now faded into a distant memory. Perhaps it was silly to think that Wall Street would pick up the crypto baton. Or was it...?

Bakkt is onboard. Even though volumes have been dismal, we can't really blame institutional investors. Volumes have been down across the board lately. So the lack of enthusiasm at the present time is certainly not confined to any specific set of investors.

More than that, recent indications show that an even larger player is now coming online. After getting their toes wet in the shallow end of the pool for about half a year, it seems Fidelity is about to jump headfirst into the deep end of the cryptocurrency pool.

According to this article in the Financial Times, the financial giant who has $2.8 trillion assets under management is now beginning a full rollout of their bitcoin btc service to all their clients. Now, that's big. Much bigger than a failed exchange going down in a blaze of glory.

Please note: All data, figures & graphs are valid as of October 22nd. All trading carries risk. Only risk capital you can afford to lose.

As Brexit moves down to the wire, proceedings in the UK Parliament continue to painstakingly progress. A 110-page plan has now been proposed by the Prime Minister. At about 19:00 this evening in London, lawmakers will hold a vote on whether to have an extended three-day debate on the bill. Many feel that this simply isn't enough time.

The British Pound remains resilient as several analysts feel that a worst-case scenario has already been priced into the market and that risk has now shifted to the upside. Amazingly, the GBPUSD is now sustaining it's sharpest rally since the referendum.

Markets are watching anxiously at the possibility of a trade deal between the US and China. The tit-for-tat tariffs have already done irreparable damage to business confidence in both countries. A lasting deal here could go a long way to restoring global growth.

Is it close? Who knows really? The latest is that Trump has claimed victory and Chinese delegates say progress has been made.  Of course, we'll need to wait for further updates and as always, the devil is in the details.

Traders of the volatile Turkish Lira continue to watch for updates as well. The 5-day cease-fire expires this evening at 22:00 local time and according to Mike Pompeo, Trump is prepared to take military action if necessary.

As well, we're now in the thick of earnings season. Traders will watch closely for macro clues hidden in the reports from the likes of UPS, McDonald's, Harley Davidson, Procter & Gamble and UPS.

Forward-looking analysts have already slashed their forecasts for growth next year as some see zero growth.

On Thursday, Mario Draghi will take the stage as he announces the European Central Bank's interest rate decision for his last time ever. Super Mario will be replaced by Christine Lagarde next Friday.

As mentioned in our opening letter, the prolonged period of low volume consolidation persists. Some feel that this is an issue for the crypto market...

I beg to disagree though. The crypto market is growing at a rapid pace as the idea of free money and tokenization of financial assets continues to accelerate.

In fact, the more stable prices are, the less speculation we see, the better off this market is. Speculation is good because it drives price discovery, but there's no doubt that speculation in crypto is vastly disproportionate to the transactional use. So these periods of relaxation in price are actually quite healthy.

However, it is possible that by now, there's actually too little speculation. At times when volumes are low, it makes liquidity thin as well, which in turn can make the market susceptible to wild price swings.

Tomorrow, we'll see the CEO of Facebook, Mark Zuckerburg, testify before the US Congress. This will place the crypto industry directly in the limelight of US political focus. Let's hope for the best.