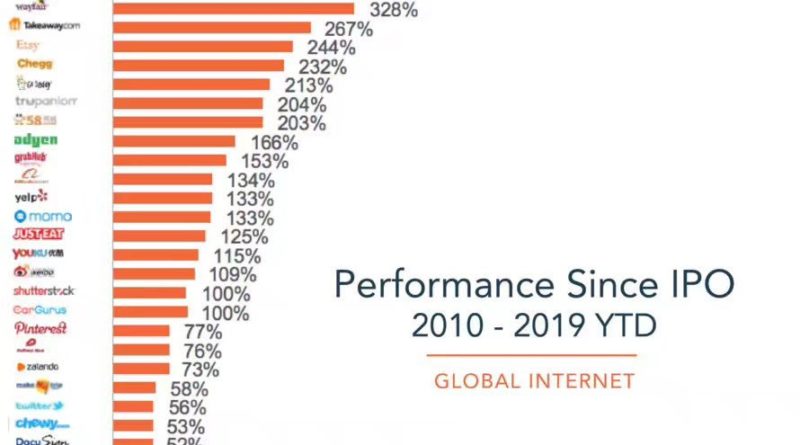 This is according to data recently shared by the CEO of Block Journal as shown in the above image.

When Bitcoin started to trade on BitcoinMarket.com in March 2010, the value of one Bitcoin was $0.003, compared to the present day price of over $9671. Additionally, when compared to the most lucrative investments made in internet firms since 2010, the closest to Bitcoin in terms of returns is Trade Desk, which has so far delivered a profit of 1,317%.

According to data from CoinMarketCap, Bitcoin has so far grown by 7,420% over a six-year time frame, starting in April 2013. Inside of this is the fact that its gain had also temporarily reached 666,666,567% during the winter of 2017. Furthermore, this past July, Grayscale Investments' Bitcoin Trust was yielding almost 300% on the year compared to mainstream investments reflected in the S&P 500 (18.7%) and Global Dow (12.9%) over the same time period.

Bitcoin has also outperformed gold in spot increases over the course of its history, by a whopping over 150% (164% for Bitcoin compared to gold's spot of 16.8%). While Bitcoin may be unattractive due to its high volatility risk, considering its massive gains, there is always the possibility of lost opportunity when money is invested elsewhere where it does not return as much the same interest as Bitcoin.

While fiat and stocks have remained strong, there is good evidence that Bitcoin and other cryptocurrencies are continuing to act as safe havens during present day economic turmoils and political uncertainties.

Cryptocurrencies are now being adopted at a faster rate than the rate at which the original adoption of credit cards and electronic money occurred. Although regulatory calls for controlling cryptocurrencies will likely continue to intensify globally, cryptocurrencies by nature are non-sovereign.

Worldwide, as economic conditions worsen due to political uncertainties and the effects of trade wars, extreme trade restrictions and sanctions on some countries as well as exchange rate manipulation and more, are playing out in favor of Bitcoin and cryptocurrencies. Because of this, it can be said that cryptocurrencies outperform fiat in areas such as cross-border transactions and speedy transactions that take place in unrestricted forms.

From Venezuela to Zimbabwe and now Hong Kong, this story is holding true. Furthermore, from this group, the most recent example is Hong Kong. Recently, it was announced that more businesses there have started accepting Bitcoin in response to the protests going on. If you don't already know, these protests were launched against China’s controversial extradition bill which signals China's growing interference in Hong Kong.

For instance, the company Pricerite has recently announced that its stores has will begin accepting Bitcoin, Litecoin (LTC) and Ether (ETH) at its fourteen locations in Hong Kong.

This is happening even as Hong Kong protestors have started to withdraw fiat from their bank accounts to convert it to USD and others resulting to use crypto as a medium of transfer of value or exchange.

Exchanges and crypto companies will continue to play a growing role in such situations, especially since they give citizens access to liquid markets that are relatively free of government control. The Genesis Block exchange, which runs many of the crypto ATMs in Hong Kong, has reportedly already been collaborating with Bitcoin Cash to help raise more money for the protests in the city. At the same time, LocalBitcoins.com, Paxful and the Tidebit crypto exchange have reported a sharp rise in the volume and price of Bitcoin in Hong Kong since the start of these protests.

Due to their "international" and non-sovereign nature, cryptocurrencies will continue to play a major role in the overall movement of value including cross-border transactions, and now, also as a store of value to some extent. In Hong Kong, crypto businesses are raising awareness that cryptocurrencies could become a better alternative to the threat of devaluation should there be a worst-case scenario like a mainland military crackdown.