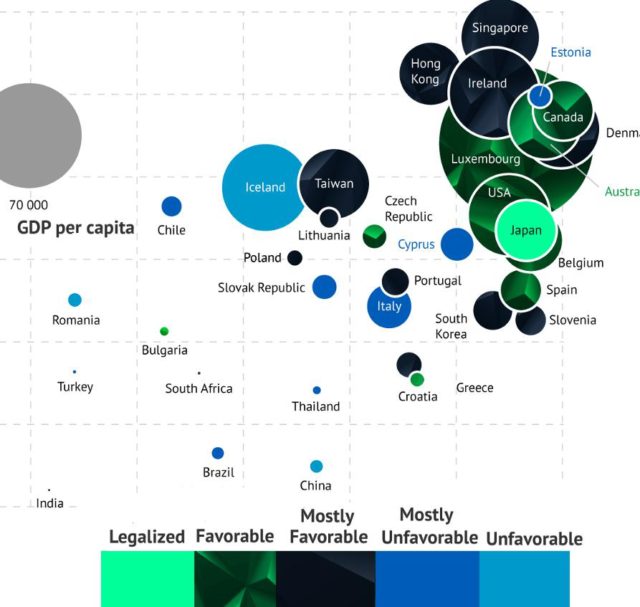 The definition -- and thus the regulation -- could also affect how the cryptocurrency performs in the market within the said jurisdiction. Many cryptocurrencies launch ICOs without even considering whether or not they fall within such definition.

For now, most cryptocurrencies are not being regulated either because of lack of legal frameworks relating to their use in various countries or because they do not qualify as securities within the definition of the authorities such as SEC, or due to both factors coming into play. However, some can actually qualify the definition as securities.

Most cryptocurrencies target global customers without restrictions to any countries, but some have restrictions for certain countries due to the existence of strict regulations.

For the cases of cryptocurrencies targeting U.S. customers, any cryptocurrency becomes security if it is a common enterprise in which investors invest some money (including cryptocurrencies) expecting to get some profit (either a dividend or increase in simple value) derived from management efforts of other people. This is according to a July report by the Securities and Exchange Commission (SEC) that investigated the DAO cryptocurrency case.

These conditions are established in the Howey Test, a means created by the United States Supreme Court sometimes back to determine whether a transaction can be termed as an "investment contract" or not.

SEC used the Howey test in their recent investigation of the DAO coin's ICO that took place in the first half of 2016. DAO raised the US$150 million worth of ether coins from 11,000 investors during the ICO period but was hacked afterwards where hackers used a flaw in DAO's code, despite a earlier security analysis audit by some of the world's leading security firms that revealed there was no problem with its security systems.

The report, which did not seek to investigate who did wrong in the DAO case, said that nobody involved in DAO would face charges. Their investigation sought to find whether DAO tokens constituted stock as a security and whether the existing laws should regulate it. It found that DAO qualified as a security.

Thus, in DAO and similar cases, for instance, the United States federal securities law can be applied on a number of activities such as distributed ledger technology, says the report.

According to the report, cryptocurrencies can be regarded as a security depending on the facts and circumstances at hand, without regarding organization or technology in question, says SEC in the report. SEC has issued a bulletin to educate U.S. citizens about ICOs and legal issues relating to them.

The Howey Test and its application to cryptocurrencies

The origin of Howey test relates to a case involving Florida-based W. J. Howey Co. and Howey-in-the-Hills Service, Inc. The case sought to determine if a land-related deal involving the two could be termed an "investment contract."

Although Howey test is specifically applicable for United States, it  can provide some guidance on what to expect in regard to regulation of cryprocurrencies, which has been looming from all over, for some time now.

The test establishes a certain criteria which transactions must meet to be categorized as securities. The investigation into DAO by SEC based their conclusion the test and found that DAO could be categorized as a security because:

1. Some money was invested in DAO: According to SEC, an investment should not necessarily be in terms money. Ether, which was used by investors to buy DAO tokens, constituted an "exchange of value," notes SEC.

2. There was some expectations for some profits by holders of the coin: DAO, the commission notes, investors put money with an expectation of getting some return on their investment. The positive returns are what can be termed as "profits."

3. The profits expected by investors would come from involvement of managerial efforts of other people: Since there was marketing and active engagement by DAO founders with the community, investors hoped that there was to be some management and oversight of the entity.

The other obligation that would make any cryptocurrency fall within the definition is the existence of a common enterprise in which people invest.

It is possible that authorities could, in future, use the “Howey Test” criteria, used in the DAO analysis, as a guide for new entrants in the crypto market. It calls on the attention from any cryptocurrency companies that define dividend-style payouts for token holders.

For purposes of launching cryptocurrencies and ICOs; here is a short analysis of cases where Howey Test would help with classification as a security or not:

Cryptocurrencies that would not fit in the Howey test categorization as securities and which would present less risks to the users, meet the following criteria.

1. Highly decentralized: Bitcoin, Bitcoin Cash (BCH), Stellar Lumens (XLM), Bytecoin (BCN), and Litecoin, for instance, do not have vertical commonality or conceivable third party or promoter upon whose efforts investors would rely.

2. Sidechained cryptocurrencies or blockchains: In such cases, there is no expectation of profits on the part of participants. The value of the coins held in the platform by the participant is dependent on the participant's existing bitcoin holdings. Ethereum and Ethereum Cash wouldn't be considered a security because there is no promise of profit (arising from people) to holders.

The same case applies to many other cryptos where either there is no promise for profits or the work to get profit is done by the coin holder and not by the third party or both situations apply. These include IOTA (MIOTA), Monero (XMR), Waves (WAVES), EOS (EOS), Dogecoin (DOGE), Factom (FCT), Augur (REP), Basic Attention Token (BAT), Gnosis (GNO), Bancor (BNT), BitShares (BTS), Zcash (ZCS), Golem (GNT) , Siacoin (SC), Tether (USDT) where the coin is pegged to the U.S. dollar, and Stratis (STRAT) where although holders of Stratis can earn more by staking coins in an open wallet, the work is done by the coin holder when their computer perform PoS to verify network activity and not a third party.

3. Open competitive mining or proof-of-burn is used as an initial distribution of the coin: There will be no conceivable investment of money in this case. In other words, there is no risk capital provided to

4. App-Coins or Distributed Computing Platforms such as Ethereum where the use-value of the token is the main motivation for participants other than profits.

NEX (XEM) would also not be considered a security because holders do not receive dividends for owning the coin. People with 10,000 NEM harvest and receive fees associated with harvesting the transaction blocks but NEM holders must do the work themselves to get the harvest reward, thus it is hard that this can be considered a dividend. The same case applies to Lisk (LSK) which does not do transactions on the chain like Ethereum but instead tracks it on the sidechains and PoS confirms the transactions.

Examples of coins where there is no expectation for profit include Ripple (XPR). Ripple is used as a value holder for transactions in the Ripple ecosystem.

Cryptocurrencies well-fitted to the Howey test and which present greatest risk to users fit in the following categories:

1. Open but heavily marketed pre-sales or sale of pre-mined cryptocurrencies that have only a small and non-diverse mining and developer community if there are some pointers that profits came from efforts of the discrete and profit-motivated group.

2. Closed-source or low transparency cryprocurrencies where there is no visibility into the operation of the technology. In this case, it would be hard to believe that they derived profits from anything else other than the hype by promoters.

3. Cryptocurrencies that have permissioned ledgers or a situation in which the community of transaction validators are highly centralized.

Others that would qualify include the Aragon (ANT) which is similar to DAO in that holders get governance and voting power and there is expectation of making some profits, Etheroll (DICE) where holders get profit from coin's gambling enterprise, and Neo (NEO) where holders get promise of profits from transactions on the blockchain and because NeoGas has some value since the Neo Virtual Economy require NeoGas for transactions.

However, it would still be unclear whether BitConnect (BCC) can be considered security because it is hard to find information on how the coin works. In Steem (STEEM), although Steam Power earns STEEM at a regular rate qualifying it as a security, Steem Dollars earn STEEM simply for holding.

OmiseGo (OMG) states that token value is derived from the fees derived from the network but it is unclear if validators earn fees or if every holder will. It would not qualify as a security if validators collect fees from confirming blocks because in that case, they will be doing the work (not a third party) to earn the fees. However, it would qualify as a security if mere holders earn network fees.

With Status (SNT), although one owns the Status Network, owning SNT does not result in any profit making.

Argentina, Bulgaria, South Korea and Croatia and Japan have legalized use of Bitcoin for instance. Those deemed as having most favorable legal frameworks include Singapore, Hong Kong, Taiwan, Ireland, Portugal, South Korea, Stovenia, Denmark while those having just favorable legal frameworks include United States, Australia, Canada, Luxembourg, Spain and Belgium.

Those with most unfavorable regulation include Italy, Slovak, Brazil, Chile, Thailand, Cyprus and Estonia. Unfavorable ones include Iceland, China, Lebanon, Colombia, Romania

On the other hand, so many countries have announced measures to regulate cryptocurrencies including Australia through a proposed regulation or from this link posted on August 17 this year.

Singapore is working on creating the National Payments Council and legal frameworks for licensing the circulation of cryptocurrencies. China is walking on two paths: it is the leading crypto mining country in the world and has been vocal about banning cryptocurrencies. Only private individuals (and not organizations) are allowed to deal with cryptocurrencies.

Taiwan financial organizations are not allowed to work with cryptocurrency businesses. Pakistan is awaiting to build some regulation before allowing crytpocurrency operations.