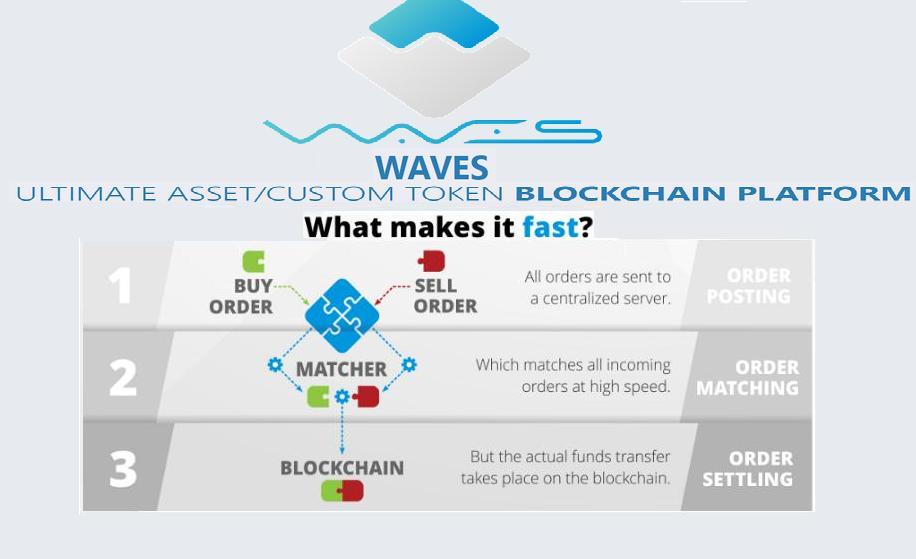 Cryptocurrencies are expected to gradually become a way of life but the technology is still in its infancy: there are many adoption barriers to break and its needs adoption by as many people as possible.

With almost everyone wanting to have a share in the now $126 billion crypto market, there is need to find out which coin and company to go for, which depends on the versatility and ability of its base technology, uniqueness of business idea and growth potential.

Among the hundreds of the crypto coins out there is Waves, whose platform is based on a powerful blockchain application that makes it possible for users to launch their new dedicated and lCOs and tokens very easily and quickly, which definitely is going to be a likable technology for budding entrepreneurs looking forward to making inroads in the crypto markets.

Moscow-based Waves was founded by Sasha Ivanov in 2016 following a change of strategy by Nxt developers. The company held an ICO in April 2016 and raised $2 million on its first day, and ended up raising $16 million or 29,634 BTC value, becoming the most successful crowdfunding project of 2016 and seventh largest funded ICO of all times.

Today, Waves has recorded some success in the crypto markets, the most notable success being Tokenomica – a venture capital organization. Upcoin is their political engagement initiative, Incent is a blockchain loyalty scheme, and ZrCoin is a green manufacturing tech business. They also own a VoIP and telecom provider EncryptoTel and a marketing drive for a mobile gaming platform called MobileGo.

The crypto platform basically wants to improve the effectiveness of currency exchanges on Bitcoin and related platforms while providing crowdfunding solutions.

It has strategic partnerships with firms in the cybersecurity and banking arena. It recently partnered with Big Four Deloitte CIS to provide comprehensive ICO services and blockchain solutions tailored and customized for real business use cases.

- Tokenization: To make custom tokens on the platform, you need at least one wave crypto currency. You give the token any name and issue as many tokens as possible. You can also decide the decimal fractions you need. For just five minutes, you can install, create an account and issue tokens for just 0.01 Waves.

A new crypto token takes a minute to launch. The token supply can be increased even after the initial token creation. You can also pay transaction fees with any other tokens on the blockchain apart from paying with the native WAVES.

- Fiat Gateways: You can exchange any token issued on the Waves platform for Fiat currencies such as EUR, USD, etc. the toens differ from Ethereum or Bitcoin tokens in that they are digitized versions of the fiat currencies with names such as wUSD or wEUR. These can be transferred on the blockchain more quickly than traditional bank-based methods and at lower fees. It is also possible to tokenize other cryptos to get things like wBTC. All digitized fiat currencies and tokenized cryptocurrencies are traded at a 1:1 ratio.

- Smart Contracts: Wave's smart contracts are coming in the Q4 2017 and will be a powerful, secure and straightforward way to execute the terms of a contract in the digital world.

- WavesDex: WavesDex is a decentralized exchange built using the waves blockchain technology that allows users to trade their BTC, ETH and other cryptocurrencies in exchange for waves.

It allows you to trade with peers from within the client, trade any pair of Waves tokens and matches orders in real time.

- Waves Wallets: Waves Wallet application (Waves Mobile client) is available on Android and iOS devices. It differs from a mere wallet in that you get to access all features of the Waves platform including fiat integration and custom tokens.

You can also save a lot of time and avoid downloading the blockchain by using the Waves Lite Client (from Google Play and GitHub) Chrome extension or opening the wallet on any internet browser. You can use WavesGUl software (Waves Full Node) on your PC. Access the Waves downloads here.

You can easily exchange Waves for bitcoins (BTC) or ethereums(ETH) at various exchanges online. Before you go ahead and purchase some waves, you need two things; the Waves Address to get some Waves tokens and Cryptocurrency such as some BTC or ETH or Altcoins to exchange for Waves. Alternatively, You can also buy WAVES directly from your Waves wallet using the web interface, chrome extension, etc.

- Enter an amount in USD or EUR.

Your WAVES will be credited to your wallet.

Waves could be used in a variety of ways in future to power the digital entrepreneurship besides other uses. Some of the possible uses are listed below.